The Silver Reed SK840 knitting machine is a 4.5mm standard-gague knitting machine that is intended for use with 3- and 4-ply yarns. The Silver Reed manual is available online here, and we have a paper copy in the workshop (as the online copy is poorly digitised, we will also make a better copy soon). You must be trained by a member of staff (currently, ask Agnes) before using the machine -- this guide is here for reference and troubleshooting.

The SK840 is a domestic knitting machine, and requires some manual input to operate. Fully-automated machines are normally referred to as 'industrial' knitting machines, to differentiate them from their domestic equivalents. Despite the lack of full automation, domestic knitting machines are often used in fashion for prototyping and designing new textiles. To learn more about industrial machines, this video gives an overview of common types, and this video is a good intro guide to knitting in general. If you want to look deeper into industrial knitting principles, the Indian Institute of Technology's textile technology department has a whole lecture series online that's very clear and gives a great amount of detail.

This post is not a detailed tutorial, but instead should serve as an introduction to the capabilities of our machine, an idea of different avenues to explore, and an overview of the steps involved in creating knitted textiles in the CCI. Machine knitting is detailed and complex, and requires time to learn and develop technique.

How to search for knitting tutorials

When looking for guides online, you will notice many variations in machine make and type, including machines with plastic beds, doubled beds, different needle gagues and tools, and a variety of carriages. While there are details particular to the Silver Reed, a lot of technique can also be learned from general 'knitting machine' tutorials on any machine as the core operation of the needles and carriage is very similar. The caveats to this are when someone is using a carriage we don't have (e.g. a lace carriage), or using both beds of a double-bed machine (if they're using one bed, it's totally fine). If you're unsure, just ask (more likely than not, we can do it on our machine). 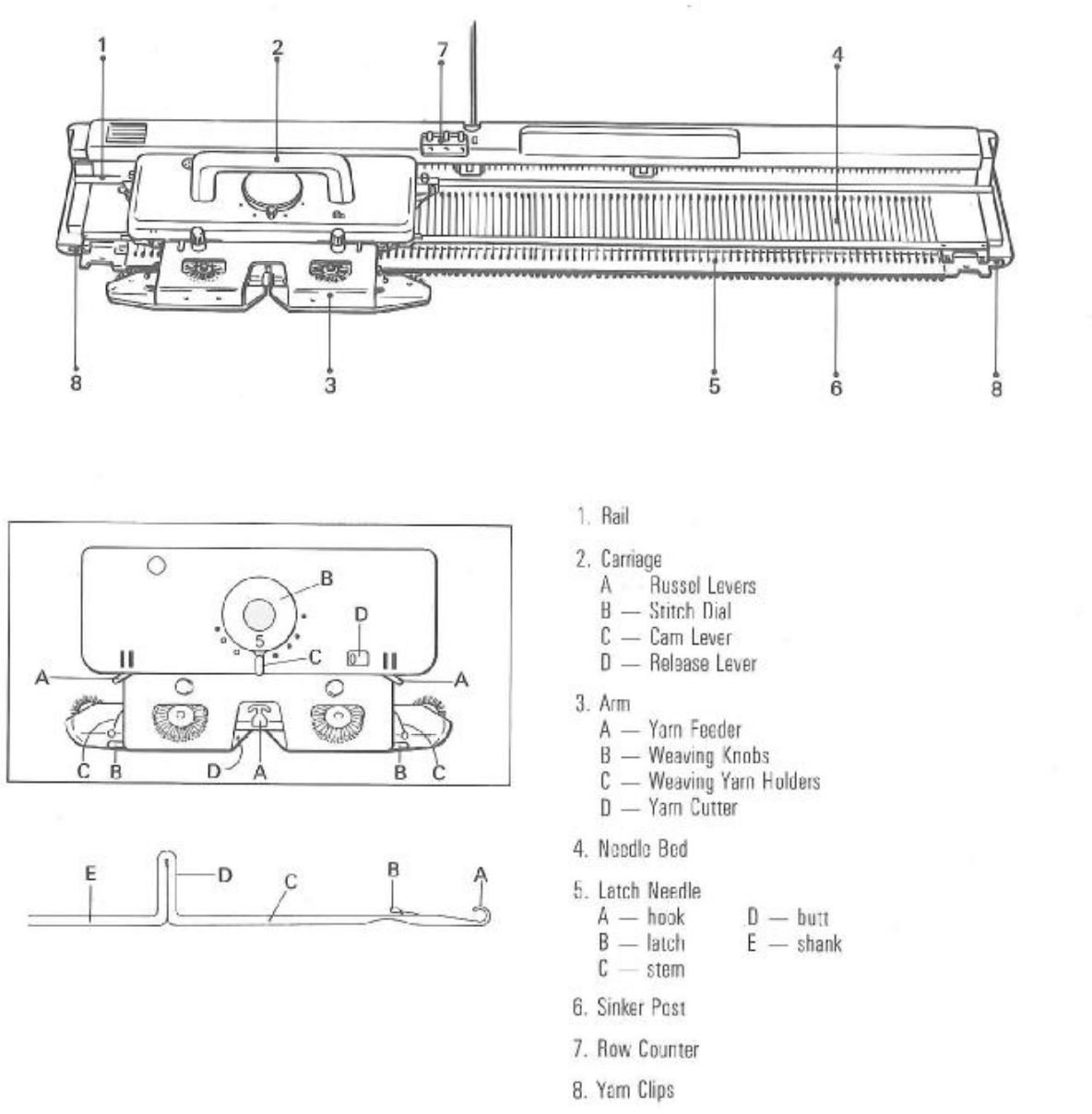 In machine knitting, knitted fabric is created by manually sliding the carriage back and forth over the needle bed, which loops a single strand of yarn a row at a time. Knitting is distinct from weaving: in weaving, fabric is created by interlacing 2 sets of threads at right angles to one another, while knitting involves taking a single thread and looping it around itself, one row at a time. (we currently don't have any weaving capabilities in the CCI). 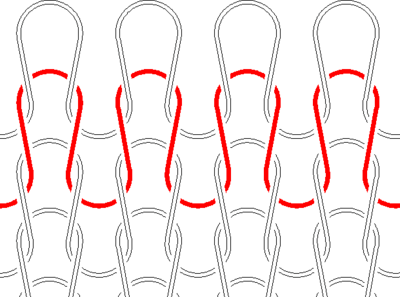 Casting on and off

Because of the structure of knitted fabric, the top and bottom edges of the textile need to be made using a special stitch, to prevent the fabric from unravelling. At the start of the piece this is called 'casting on'; at the end it's called 'casting off'. Depending on the yarn, if you are just experimenting with samples then you can get away without casting off (the fabric will still be vulnerable to unravelling), though there is no way to knit without casting on.

There are a few different cast-on techniques that can be used on the Silver Reed, 2 of which are enumerated in the manual:

Casting off is an important technique to learn, and while slow at first will get much faster over time. The general idea is to bind off one stitch at a time by looping it into the next stitch along, working your way across the fabric until there is a single stitch left to tie off.

There are 2 main techniques: latch tool cast-off and transfer tool cast-off. Transfer tool is a little slower, but considerably easier to learn (and the one I'd recommend starting with). This video does a good job of demonstrating both techniques. 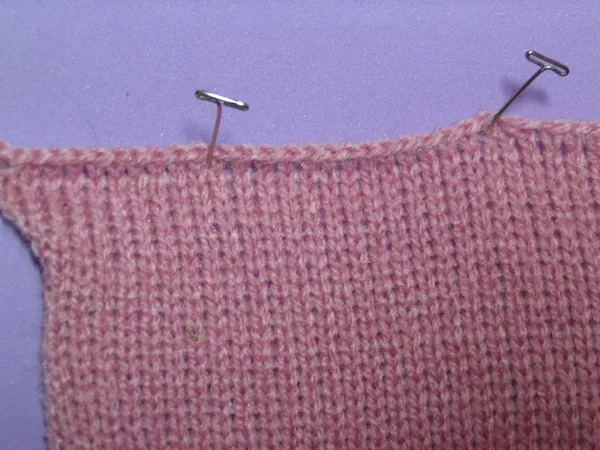 The SK840 supports a range of options for different kinds of stitch, which can be selected by changing the dial on the top of the carriage. Many of these stitches may also be used alongside the

The SK840 may be computer-controlled using the DesignaKnit software and SilverLink module, that connects to the knitting carriage. Currently at CCI we do not have either a lace carriage or a ribber. A key to the core machine parts is pictured below:

The simplest knitting style on the machine is called 'Stockinet' -- this is a style of knitting that will result in a smooth 'knit' side on one side of the fabric, and a rougher 'purl' side on the other.

This is the simplest form of knitting, and equivalent to a 'knit-purl' alternating stitch in hand knitting. It produces a flat, smooth side (the 'right side') and a rougher side ('wrong side'). To knit stockinet, select the 'O' stitch setting on the carriage.

Fair Isle knitting is a common way of creating patterns in knitted textiles, by alternating between 2 colours within each row. On the SK840, this is also one of the three stitches (the others being slip and tuck stitches) that may be automatically controlled using the SilverLink controller; it's quite low-effort to produce some really beautiful, impressive things that it would be very hard to knit by hand.

To knit Fair Isle, the machine should be connected to the computer via the SilverLink, and DesignaKnit should be in interactive knitting mode. The carriage should be turned to 'F' for Fair Isle, and the arm should be threaded with 2 yarns (the first in position 1, the second in position 2).

This video shows the technique using punch-cards rather than the computer, but the core ideas are the same. For more guidance on creating patterns using DesignaKnit, see the wiki page on Creating Digital Knitting Patterns with DesignaKnit. 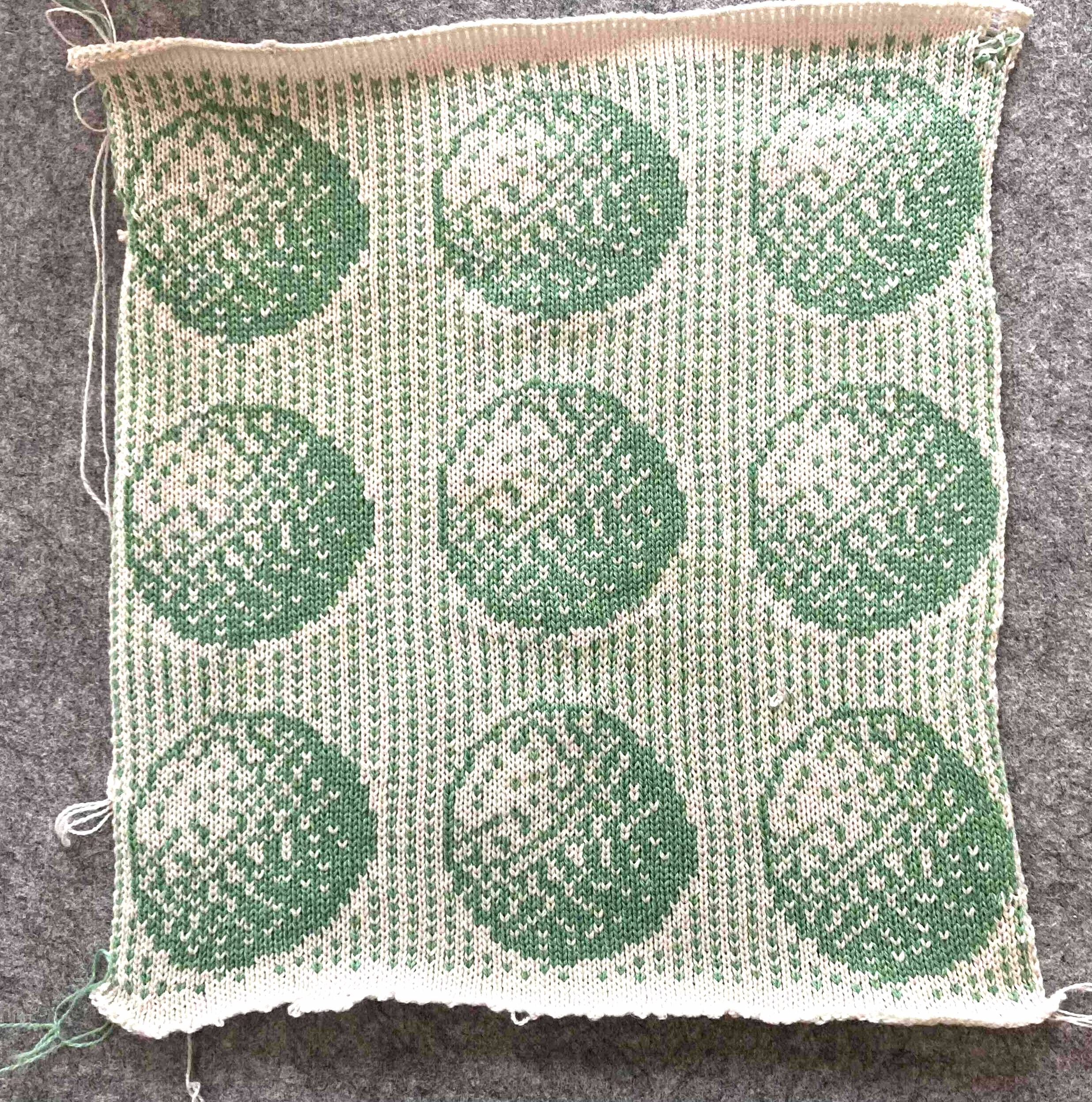 Slip stitch is a knitting technique where a stitch is skipped (or 'slipped'), that can be used to add texture to knitted fabrics either manually or automatically (using the SilverLink). Skipping stitches creates patterns in the strands of un-knitted yarn, and is often used alongside other texturing techniques. 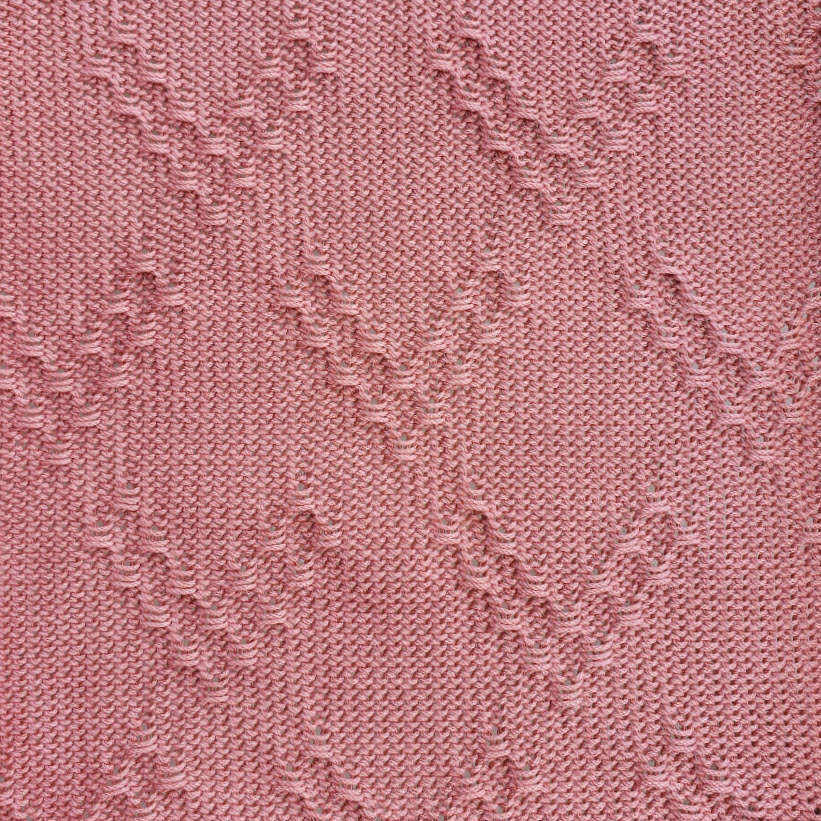 Tuck stitch is a knitting technique that involves tucking a stitch from one row into a row above. Like slip stitch, tuck stitch can manipulate the texture of the knitted fabric, though somewhat more dramatically, as depending on the depth of the tuck the fabric can be structured in all sorts of interesting ways. Stitches may be tucked automatically using the SilverLink. 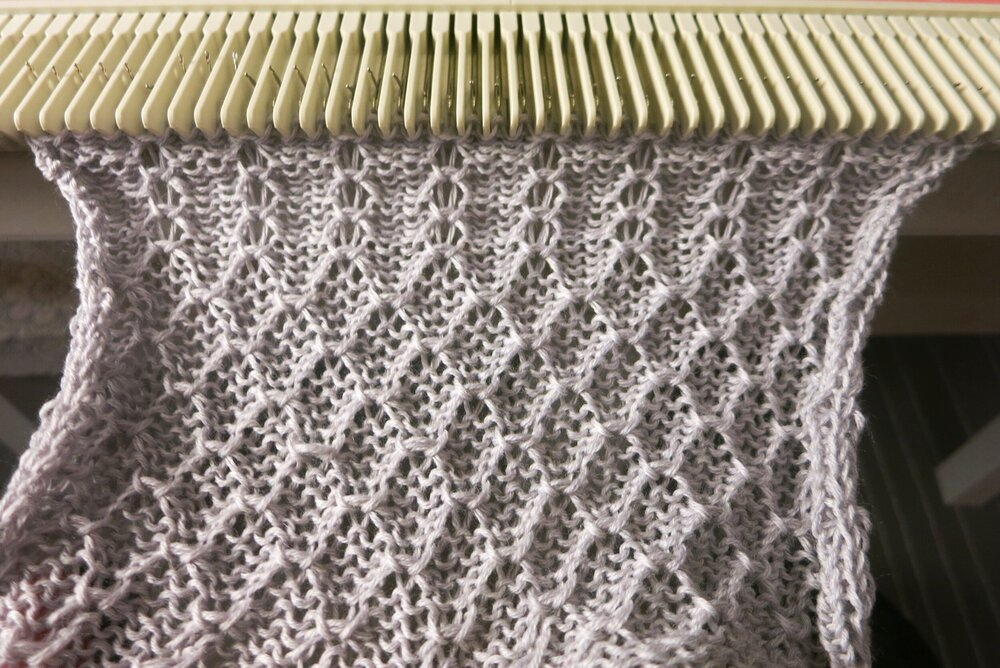 The 2 colours here are knitted in horizontal stripes, but with a regular pattern of stitches 'tucked' into the stitch above, manipulating the structure to resemble vertical lines. The result looks very beautiful, but it's time-consuming to change the colour every 2 rows. 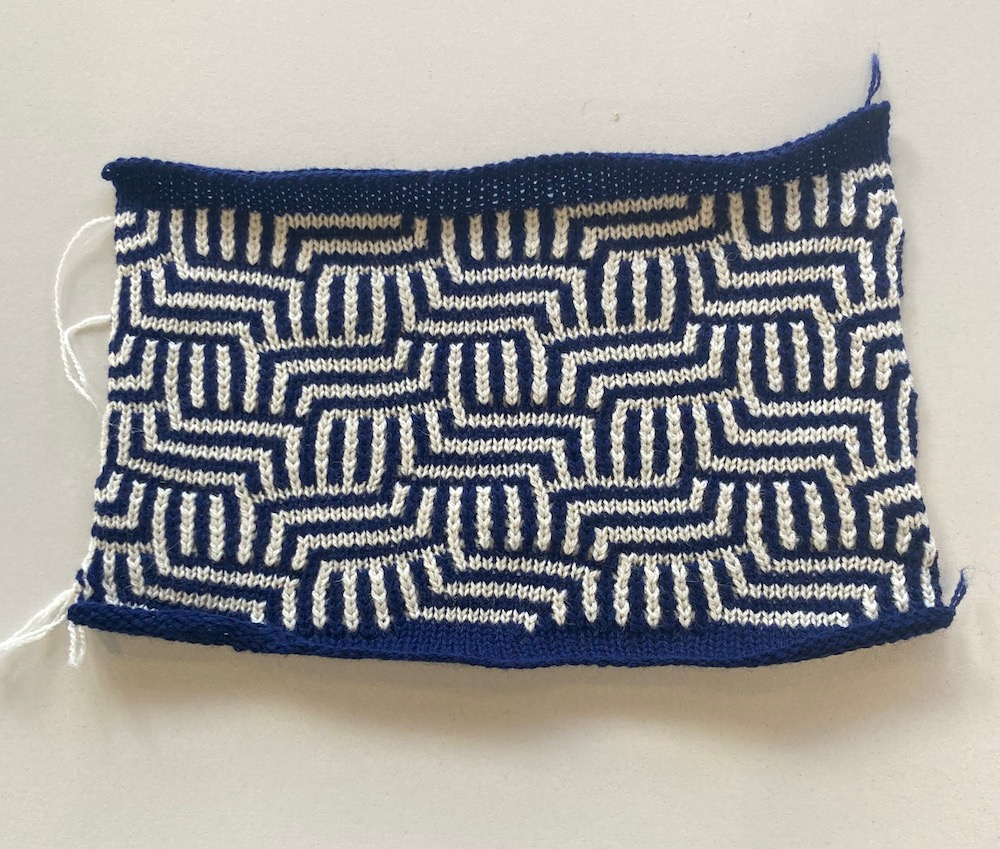 What's interesting about tuck patterns is that they look nothing like the patterns that produce them. There's a great and incredibly detailed blog post on Alessandrina (very helpful knitting blog) which explains in great detail.

Many knitted garments are hemmed with a stretchier 'rib' edge (think cuffs, collar and bottom of a sweater, for example). This adds structural stability to the fabric and also looks great. Typically this is done using a 'ribber', or a double bed machine, which we don't have in the CCI. However, it's perfectly possible to make a mock rib using a single bed machine that's functionally very similar.

I watched this video for guidance, which was pretty good (it's in Norwegian, but English subtitles), which gives a good guide to creating a 'mock' rib on a single bed machine.

Knitting with every other needle

This is used to knit yarns like mohair, or chunkier yarns. This video (it's in Norwegian, but has English subtitles) gives a good demonstration of the cast-on technique required: after casting on, knit as normal, but with only half the needles engaged.

The Intarsia Carriage is an alternate carriage for the machine that allows multiple colours to be used in a single row, without having runners along the back like in Fair Isle. It produces large blocks of colour (if you want to use fine detail, Fair Isle is normally a better bet), though requires considerably more manual effort than 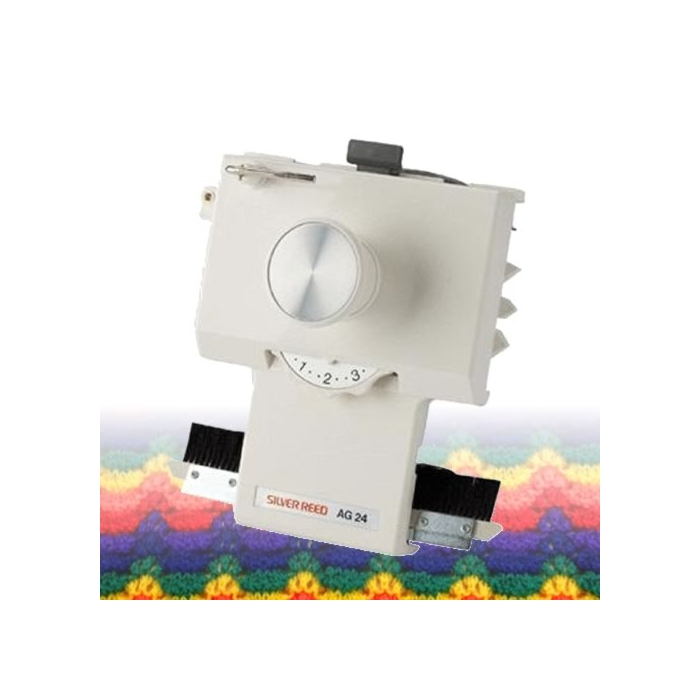 We have an automatic colour changer in the CCI, that makes changing colour between rows considerably faster, and also allows selection between 4 yarns, rather than 2. It cannot change colours within a row (for that, you want either fair isle or intarisa) -- instead think of it as a way of making stripes a lot more efficient. It's particularly useful when knitting tuck mosaic patterns that require regular colour change. The automatic colour changer may also be used with fair-isle or other patterning techniques (see example below), though when using 2 yarns (as in Fair Isle) only one may be changed automatically.

Please talk to Agnes before using the automatic colour changer for the first time. 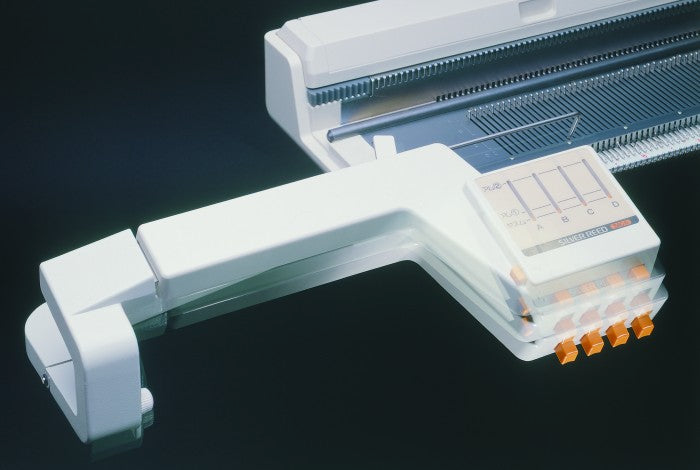 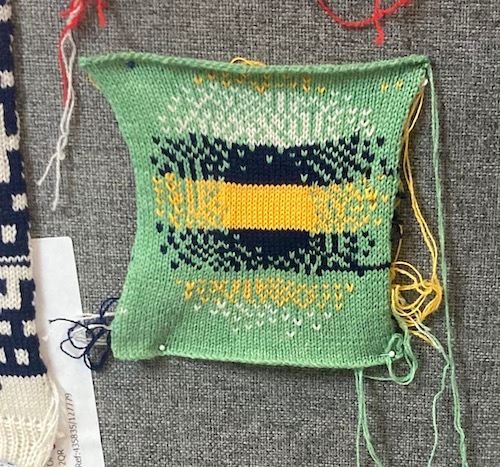 The knitting machine can also be used to create textiles with electronic properties, including conductive and stretch sensors, and even radio components. Please see this guide to knitting with conductive yarn for more information.

Revisions
Export
Back to top